So many of you know that one of my kids has arthritis but did you know we are also dealing with asthma as well. She has had asthma for about 6 years now, and when we first was diagnosed with it, it was horrible but we got it under control. However we stayed in the ER just about every weekend. We didn’t know she had it but while we lived in KS, and was on the PCS here we noticed that she had a nightly cough, and we were like what in the world is going on. Within a year her asthma was out of control and full blown. From asthma, she would almost always get pneumonia, or the flu or something, which would aggrevate her asthma even more.

Then now it is now not under control. I want you to check out the video here about how does an asthma attack feel like. If you can’t watch it, just imagine someone putting a plastic bag over your head and mouth and you are suffocating and if you don’t get the bag off your head in time you can die from it. Same way with Asthma. It is a scary thing to wake up in the middle of the night when one of your kids can’t breath and we have to rush to the ER.

A month ago, we were in the ER because C’s asthma was terrible, this was the first time in 6 years that her asthma almost required a hospitalization. They put her on a round of serious medicines, gave her a z-pac, and gave her two medicines for her nebulizer.  Before we even left we stayed in the ER I knoe 6 hours to try to get her sounding better, the doctor did say that after all the treatments he gave her (3) and when came back the next day she was getting hospitalized. Well it took time but it got better. Here we are a little less than a month, and we were back in the ER. Now I have to say I did call the military treatment clinic, and he gave us a follow up for July (so it was almost a month away). When I called the clinic two days ago to request a same day appointment, both the scheduler and triage nurse were on their heads to have me rush her in to the ER. Hello I think I know when she is serious enough to go into the ER, but they would not give us an appointment to see the provider so he could adjust her medication (that’s all we could have prevented an ER visit). Unfortunately you can’t win against the military in their silly ways and protocols. The ER doctor was like, “Mom you know what you are talking about”. We were there for a short visit, they gave her steroids and more nebulizer medicines.

Seriously I have dealt with this illness for the last 6 years, I know what triggers her, etc..anyway I digress…

I am pretty thankful there is a small hospital 5 blocks from us.  This is the first hospital that I have been to that the nurse who helped you will actually call you the next day to see how the person is feeling. Totally awesome! Sentara Hospital gets a A PLUS in my book! WOO HOO… I love the VA hospitals.

People with asthma who have an inflamed airways, have to work twice as hard to get air through lungs. 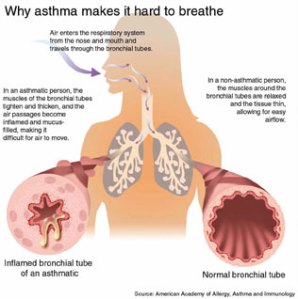 Check out the Foundation for Asthma’s information below:

Statistical information demonstrates that asthma is an epidemic that is both serious and widespread, and that it has been growing rapidly. The disease affects all age groups: infants, school children, young adults, baby boomers, and seniors. Nearly one in every 13 people in the United States has the disease, and the growth of asthma among children is particularly alarming. Other little known facts include:

Despite the overwhelming prevalence of the disease and the suffering it causes, relatively little progress has been made to date in improving treatment, understanding the causes, preventing, and finding a cure.

Living with Asthma is Frightening