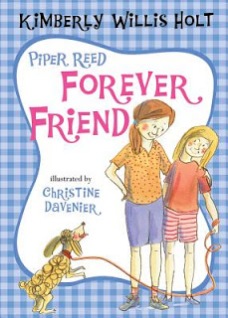 So here we are today, with Kim Willis Holt, author of the Piper Reed Book Series, I have been very fortunate to read the books and blog about a few of them! This month is the release of Kimberly’s book, PIPER REED FOREVER FRIEND.  This is the 6th and, possibly, final book in her popular PIPER REED series.  PIPER REED FOREVER FRIEND finds Piper and her family leaving Pensacola and relocating…–that’s all the details you get, you are going to have to win the book to read the rest – something my family and I know very well. Please check out the interview below and enter the GIVEAWAY!

Here are the books in the series:

I enlisted the help of my oldest daughter and we read the book together, because I wanted to see what was her reaction to this book. She read it in half a day, she said the book was so good she wanted to finish it. I was lucky to do a book review of the first book in the series, Navy Brat and my daughter read that book too in a FLASH too. Here’s the juicy stuff…TRIPLE GIVEAWAY three lucky people will get: 1 signed copy of Piper Reed Forever Friend (hardback) and two signed Piper Reed Navy Brat (paperback).

Kimberly Willis Holt (September 9,) is an American writer of children’s literature. She is best known for When Zachary Beaver Came to Town, which won the 1999 U.S. National Book Award for
Young People’s Literature. It was adapted as a film of the same name. She was born to a US Navy chief in Pensacola, Florida, but spent most of her childhood in Forest Hill, Louisiana, which inspired her first novel, My Louisiana Sky. As the child of a naval officer, Holt moved from place to place, most notably, France, Guam, and Louisiana. Her experiences as a navy brat are reflected in her Piper Reed series. She now resides in Amarillo, Texas.

1. What is your background (how can you relate to military kids and military spouses)?

I’m a military brat. My dad served in the U.S. Navy for 21 years. The year he retired from the service was the year I graduated from high school. So I spent my entire childhood as a military kid. I was born on NAS Pensacola  which is why I chose that as the setting for the first books. We also lived in Norfolk (off base). I remember a lot about that time.  That’s why I used that setting in that last book.

2. What is your inspiration for writing these series? My dad was a Chief and I’m one of three girls. My mom was very artistic and later became a teacher (special ed). In a way, the books are semi-autobiographical.

3. What other books have you or plan to write? My most popular book is WHEN ZACHARY BEAVER CAME TO TOWN. It’s a middle grade book that is read in a lot of classrooms. I have 16 books out and am working on a middle grade novel set in Louisiana during the 40’s.

Will they be military themed related? This one won’t, but now that I’ve explored the military childhood in a light humorous way, I’m thinking of doing something more serious.

4. What is the most interesting adventure you have participated in? When we lived on Guam, my Sunday School class had a field trip on the beach where we discovered and explored some caves. That was a cool class.

5. What advice can you give to young upcoming authors? Three things–Read everyday–Good writers are good readers. Write everyday–it can be a letter to your grandma or a poem or anything that requires you to put words on a page. And notice things–creative people notice the things that others don’t see.

Find out more about author Kimberly Willis Holt on her website!

Join the Piper Reed Fan Club for lots of fun reading and activities!

SO are you wondering who is this girl? 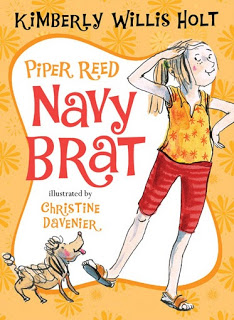 This is a book that I have been reading by Kimberly Willis Holt. I was lucky enough to review this book and I read it and then I read it to my kids! This is a GREAT book it reminded me of a book when I was a girl called Ramona Quimby. I just finished reading this book to my girls. They absolutely loved the book. You know I enjoy reading books with a great descriptive writing, and she has obtained this skill in this book. My oldest daugther could relate to Piper better than my youngest she is 10, Piper is 9, her daddy is in the military so is Piper’s. We moved around a lot this past 10 years.We can relate to this book moving and deployments. I recommend it and I will let my youngest daugther read it again!

So LUCKY for TWO READERS I am giving away two signed copies of this book!

How to Enter:
(Do any or all of these entries. )

(Please leave a separate comment for each entry so I can track them!)