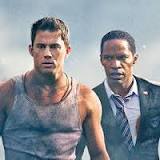 I recently received an email saying that on IndependenceDay July 2, 2013, to thank America’s troops for their sacrifice and service, active military personnel and veterans will be admitted with one guest to see Columbia Pictures’ White House Down for free at any Regal Entertainment Group, AMC Theaters, Cine-mark Theaters, or Car-mike Cinemas theater by showing proper military identification. The special invitation to America’s military personnel and veterans is valid only on the 4th of July and seating is available on a first-come, first-served basis at each participating location.

Rory Bruer, president of Worldwide Distribution for Sony Pictures, said, “We think White House Down is the summer’s best action movie, so on July 4th, we’re inviting all active duty and veteran military personnel to bring a guest and see it for free. It’s a great way to celebrate the holiday and to honor and thank the troops for their service to our country.”

OK OMG one word CHANNING TATUM! I saw him in person at the premier of Dear John at FORT BRAGG! WOW! I totally wish I would have been invited to the premiere here in DC, b/c I was in the area!

In White House Down, Capitol Policeman John Cale (Channing Tatum) has just been denied his dream job with the Secret Service of protecting President James Sawyer (Jamie Foxx). Not wanting to let down his little girl with the news, he takes her on a tour of the White House, when the complex is overtaken by a heavily armed paramilitary group. Now, with the nation’s government falling into chaos and time running out, it’s up to Cale to save the president, his daughter, and the country.

Being nominated and picked as the 2011 Army MSOY by Military Spouse Magazine is such an honor. As your Branch Winner Army Spouse of the Year, I want to help focus on issues that are affecting our military families, such as education and deployments (especially focusing on PTSD and how that affects military spouses). I want the spouses to know that even though you may feel alone, and you don’t want to talk about your problems, nine times out of ten, we are all going through it or have gone through the same situation. I also want to focus on Spouse employment and education. I feel that if I can help someone I will make a difference in their life. I really enjoy politics, especially dealing with military family policy. In 2008 to August 2010 I was a Family Readiness Support Assistant for 1st Brigade Combat Team, 1st Brigade Special Troops Battalion. Working as a FRSA was more than a job, it was passion for me; I really felt like I helped the spouses and families when the unit deployed.

It is an honor to represent the Army spouses around the world. There are so many spouses in all the Army who dedicate their time and lives to helping other spouses through deployments, grief and volunteering that it is an honor to be able to represent such a distinguished group of people. I would like to show people that military spouses (men and women) are a tough group of people; we are resilient and can handle just about anything thrown at us. Even though sometimes life can be difficult, we can adapt and overcome with the situation.

I am looking forward to a great year representing the Army Spouses!

ARMY NATIONAL GUARD and ARMY RESERVE
In the past few years many changes have been made through the Army Reserve and National Guard Bureau to improve the resources and support available to the families of the Reserve Component.  The goal of this blog post is to inform and help Guard and Reserve spouses, to make the road through chain of command and deployment smoother and easier to travel. Take the information in this blog and adjust it to the needs of your particular situation.  As you read this blog, keep in mind that the National Guard and Army Reserve are each unique and it would take a whole separate website to cover all the different situations and circumstances that can and will arise.  The most important thing to remember is that there are resources available that can provide answers to your questions.
A LITTLE HISTORY AND EXPLANATION
The term “Active Army” normally defines Soldiers that are on duty 365 days a year during their term of service.  Whereas, Reserve Component Soldiers have traditionally served one weekend a month and 15 days each summer, in addition to any active duty required for schools and particular assignments.  Reserve Component Soldiers have often been labeled citizen Soldiers inasmuch they also have civilian careers.  The Reserve Component of the army includes both the Army National Guard and the Army Reserve.
The National Guard is the oldest of our nation’s military services.  It traces its lineage back to December 13th, 1636 when its oldest regiments met for their first drill on the village green in Salem, Massachusetts.   These regiments were formed in the British military tradition to provide security for the British colonists in the absence of regular British Soldiers.  These Soldiers were the nucleus of the Continental Army that won American independence, hence the symbol of the National Guard being the Minuteman.  The Constitution specifies that congress will raise, fund and be responsible for the training of the militia and that the President can call on them in times of national need.  These roots have resulted in the dual mission of the National Guard.  During times of peace, all National Guard Units report to their State Governor as their Commander in Chief.  These units serve their states in time of civil unrest and disasters.  Every State and Territory of the United States has National Guard Units that are commanded by their State Adjutant General who reports to and works for the State Governor.  During these times these units, along with the Active Army make up our National Military deterrence.  Finally, once mobilized, National Guard Units report to the President as their Commander in Chief and are available to fight America’s wars.
The Army Reserve is a Federal Reserve force that was founded in April 23, 1908, as the Medical Reserve Corps.   Initial efforts were to build a federal force of technical specialties to fill Active Army shortages in times of need.  As a federal force the Army Reserve do not have the same state mission as does the National Guard.  They will only support civil unrest or disasters if called upon by our federal government.
The Active Army was formed on 14 June 1775-over a year before the Declaration of Independence.  It is the nucleus and infrastructure that forms our National defense today.  Unlike the Militia, it is a federal force reporting only to the President of the United States as its Commander in Chief.
KNOWLEDGE IS POWER AND PEACE OF MIND
Many Reserve Component spouses have little familiarity with their Soldier’s “part-time” job and drill weekends.  If you haven’t educated yourself on this part of their life, now is the time.  Motivate yourself to reach out and find as much information as you can.  This will put you in a position to be in control of any situation that may arise.  If you take the position of FRG Leader, families of the Soldiers will look to you as an example and as a person who will have the answers to their questions.
There is a lot of information and training available.  You may want to start by taking advantage of instruction called Army Family Team Building (AFTB) and Guard Family Team Building (GFTB).  Both are offered through State Family Programs Offices, Army Community Service (ACS) and on-line.  It is a good, basic introduction to the military and how military life affects your life as a spouse.  There is more than one short, modular course of information, to accommodate different levels of experience.  Continue gathering information by reading many of the publications that are available.  There are countless resources on the Internet that support the military family. Those specific to the Guard and Reserve will be of benefit to you (a few helpful sites are listed at the end of this chapter and also in the Army Resources and Organizations chapter of this book).
Especially for Guard spouses:  Check out your state’s National Guard website.  There should be a link to “Family Programs” somewhere on the home page.  An example of a great web page can be found at www.ut.ngb.army.mil.  There are many informational pages and links available and the site is easy to navigate.  It is important to remember that each state runs their FRG program a little differently according to the Adjutant General’s guidance.  It is important to be familiar with the rules and regulations of your state.
A helpful bit of information to be familiar with is the Chain of Command that applies to your situation.  (Be aware that it will change during a deployment.)  This chain of command can be a reference to you, for often there are knowledgeable and experienced spouses of those in the chain of command. They have often been in your situation before.